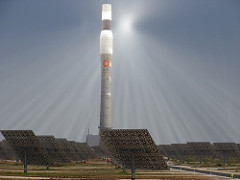 From The Guardian, April 6, 2017 (Image: Solar thermal plant in Spain, Beyond Zero Emissions via Flickr)

Between the political bickering following a spate of blackouts in South Australia and the billionaire entrepreneur Elon Musk tweeting that he had a fix, and then the South Australian government announcing that it will build a grid-connected battery storage facility, interest in renewable energy storage has never been higher.

While lithium ion batteries sold by Tesla and others are perhaps the most widely known storage technology, several other energy storage options are either already on the market, or are fast making their way there.

All are hoping to claim a slice of what, by all indications, will be a very large pie. Read more…

Like so many of the Indigenous communities dotted across the Australian continent, the remote communities in north-west New South Wales are struggling. “These are not happy places,” says the Euahlayi elder Ghillar Michael Anderson.

Many of the 300 or so residents of Anderson’s hometown of Goodooga rely on welfare, he says. Exorbitant electricity bills – up to $3,000 a quarter for some households – further exacerbate the poverty. “We’re always at the end of the power line, so the service that is there is quite extraordinary in terms of cost.”

Many other communities rely on expensive, emissions-intensive diesel-powered generators to meet their electricity demands. “It’s a real problem and we need to make sure that we fix this,” Anderson says.

To that end, Anderson and 24 other Indigenous leaders have formed the First Nations Renewable Energy Alliance, which aims to tackle high power costs and entrenched disadvantage – along with climate change – by pushing for renewable energy in Indigenous communities. Read more…

From The Guardian, February 24, 2017 (Image: Marcelo Medeiros via Flickr)

Anyone doubting the potential of renewable energy need look no further than the Danish island of Samsø. The 4,000-inhabitant island nestled in the Kattegat Sea has been energy-positive for the past decade, producing more energy from wind and biomass than it consumes.

Samsø’s transformation from a carbon-dependent importer of oil and coal-fuelled electricity to a paragon of renewables started in 1998. That year, the island won a competition sponsored by the Danish ministry of environment and energy that was looking for a showcase community – one that could prove the country’s freshly announced Kyoto target to cut greenhouse gas emissions by 21% was, in fact, achievable.

The contest didn’t bring with it funds to bankroll the energy transition. But it did pay for the salary of one person tasked with making the island’s 10-year renewables master plan a reality.

That person was Søren Hermansen, a Samsø native vegetable farmer–turned–environmental teacher. Hermansen has wielded his pragmatic, roll-up-your-sleeves attitude to great effect over the past two decades, turning his own rural community into a green powerhouse, and evangelising to communities around the world that they, too, can make the transition. Read more… 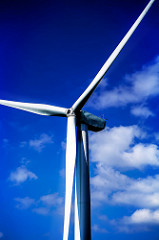 After years in planning, construction on the Silverton windfarm in western New South Wales is finally set to begin after the sale of the project from AGL to its Powering Australian Renewables Fund (PARF).

The deal will see AGL pay just $65 a megawatt hour for the first five years of the windfarm’s operation, effectively undercutting current prices for coal-generated electricity.